The ultimate sedan for enthusiasts, but comes at a price.

The Skoda Slavia 1.0 TSI, which we recently reviewed, is the mainstream engine variant of the range and is likely to account for around 80 percent of all Slavia sales, according to the company. And that’s not surprising, because the 150hp 1.5 TSI is well over Rs 2 lakh more for just a more powerful engine, so the reasons to buy it have to be compelling enough. So are they? 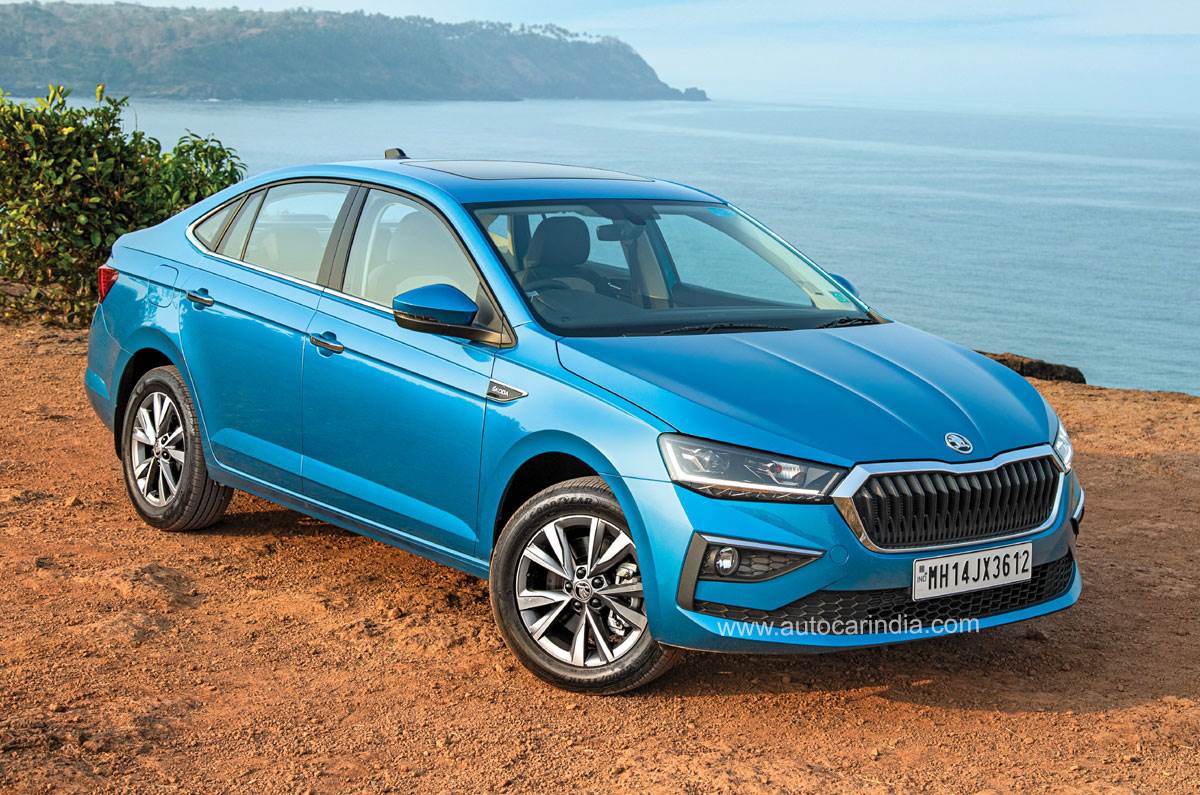 For starters, the 1.5 TSI is the most powerful midsize sedan you can buy and, in essence, is the ‘RS’ version of the Slavia, though it isn’t badged an RS. In fact, there isn’t any visible difference between the 1.0 TSI and 1.5 TSI, not even a badge denoting the different engines or power outputs. Skoda says it will soon give the 1.5 TSI a TSI badge with the ‘I’ coloured red, but there’s no doubt the company has missed a trick by not differentiating the products at all to justify the huge price difference. A flashier set of alloys, a more prominent boot spoiler and even just some decals would go a long way in letting 1.5 TSI customers flaunt the fact that they have bought the hotter variant. 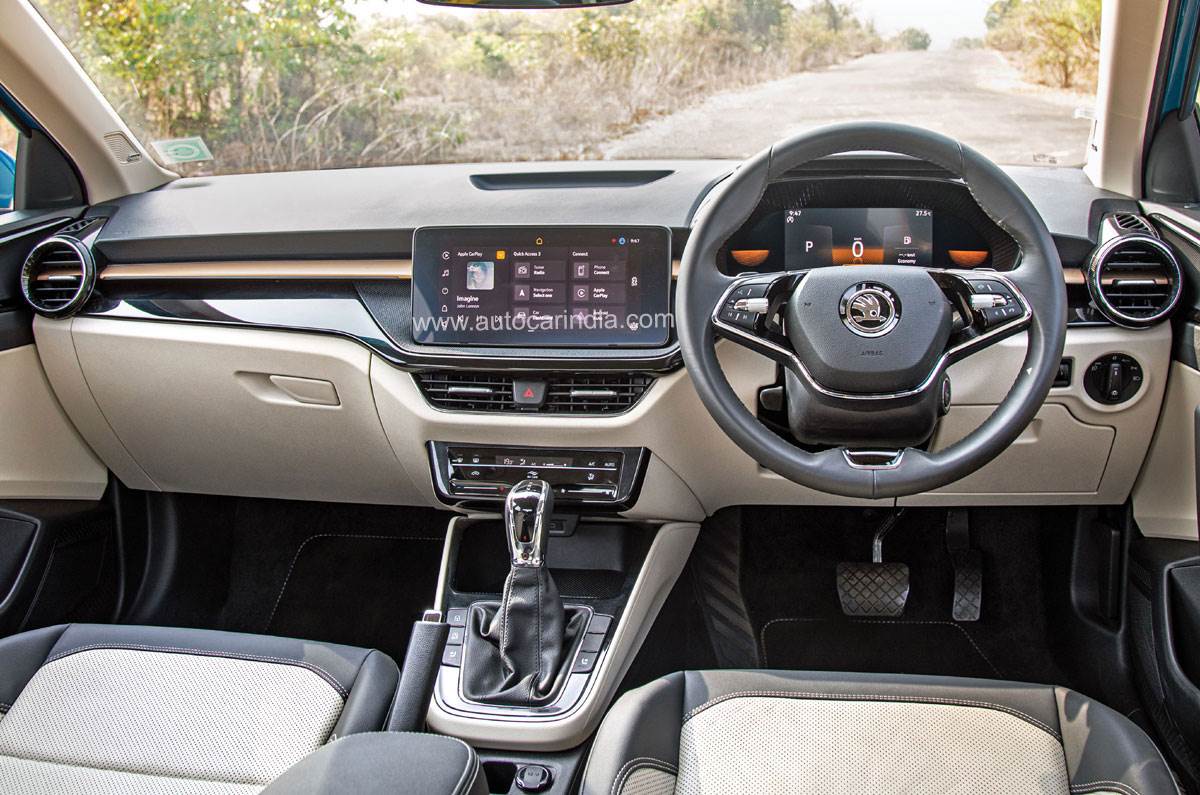 Coming to the 1.5 TSI engine itself, we had an idea of what to expect after experiencing it in the Kushaq, and in the marginally lighter Slavia, it’s even more entertaining. The 1.5 TSI is essentially the 1.0TSI with an extra cylinder and extra power. This four-cylinder, direct-injection turbo-petrol is a state-of-the-art unit and features tech like cylinder deactivation for better fuel economy. Official test figures for the 1.5 TSI manual and automatic are 18.72kpl and 18.41kpl, respectively, but given how sensitive turbo-petrols are to driving style, a heavy foot could send those figures tumbling down in the real world. You’ll have to wait for our detailed road test for realistic on-road fuel efficiency figures.

Let’s start with the manual 1.5 TSI, which should be the enthusiast’s choice. The light clutch and slick, short throw gear shift allows you to exploit the 1.5 TSI engine’s 150hp and 250Nm of torque to the fullest and gives you a level of engagement only a manual can give. The 1.5 TSI manual is also the quickest of all the Slavia variants and, in fact, it’s quicker than every other midsizer with a sub-10 seconds 0-100 time, or 9.42 seconds to be precise. That’s noticeably quicker than the Slavia’s main rival, the Honda City, which in manual form hits 100kph in 10.02 seconds. Keep your right foot down and the Slavia 1.5 TSI keeps accelerating hard, leaving the City trailing behind. The Skoda sedan gets to 120kph in just 12seconds, a good three seconds faster than the City. The punchy mid-range and a strong top-end is the hallmark of the 1.5 TSI and  unlike many turbocharged engines, this one loves to be revved all the way to its 6,600rpm redline.

But even if you want to drive in a relaxed mode, the broad torque spread gives you the grunt to pull forward in any gear. The in-gear acceleration times put in perspective Slavia’s real-world performance which is in a different league. A 20-80kph time of 9.71s in third gear is a good four seconds quicker than the Honda City; and in the 40-100kph 4th gear slog, the Slavia is a scarcely believable seven seconds faster. 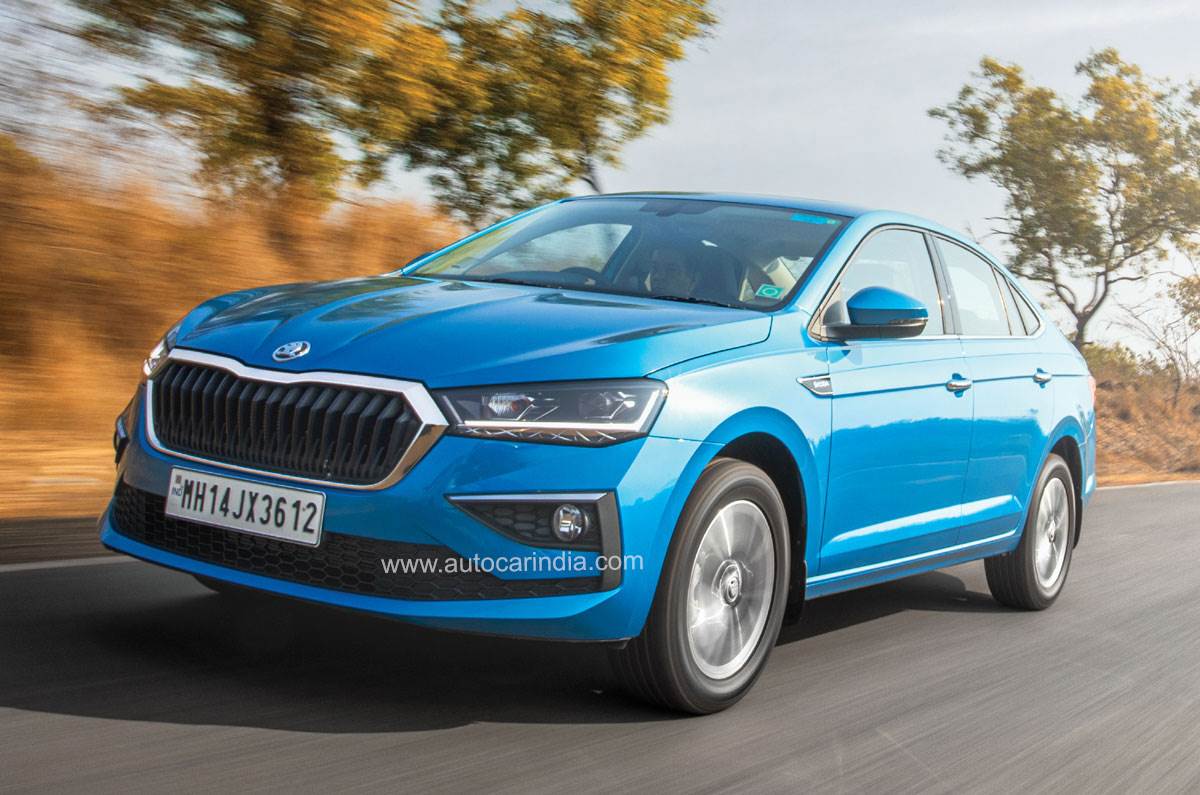 On an open road, manual 1.5 TSI is a devastatingly effective overtaking tool, drop down to the right gear, floor the throttle and the Slavia lunges forward like no other midsizer. The 1.5 TSI is smooth for the most part but gets a bit boomy when you rev it hard and there’s a bit of resonance creeping into the cabin. In fact, the 1.0 TSI felt smoother than the 1.5 TSI at the redline!

If there is a weakness, it’s at the bottom end of the power band. Below 1,800rpm the 1.5 TSI feels relatively sluggish and unresponsive. It’s not just turbo lag, but tall gearing that is responsible for this low-speed lethargy. In the interests of fuel efficiency, Skoda has chosen a higher than usual gearing and whilst this gives the Slavia long legs for the highway, it’s very hard to (legally) find the road to exploit this engine to fullest. Second gear is good for 100kph and third gear almost 160kph, so for all practical purposes you can only wring this engine to the redline in the first
two gears. In the balance gears, it’s rare you’ll come anywhere close to the redline to enjoy this engine’s strength which resides in the 4,000rpm to 6,500rpm band. 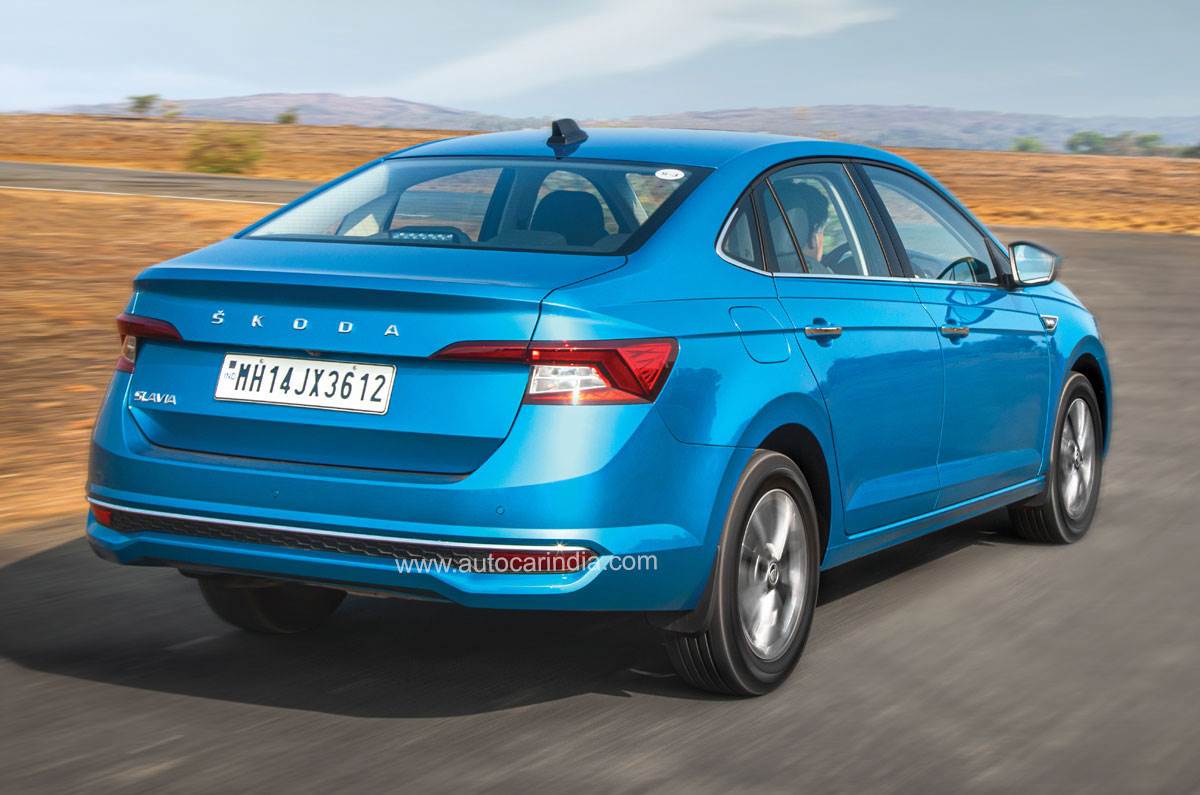 This is one of the reasons why the 1.5 TSI automatic makes more sense. Firstly, the gear ratios of the 7-speed twin clutch automatic DSG unit are better spaced, making it easier to access the full spectrum of the engine’s powerband, but the main reason for opting for the DSG is the DSG itself. The fast-acting DSG is the best automatic option in the segment and adds to the driving pleasure. There’s a momentary hesitation when you floor the throttle pedal, but thereafter, the DSG swaps cogs quickly and smoothly in an almost seamless way, especially on the upshift. If you want a bit more control, the steering mounted paddles let you hang onto the engine revs longer in each gear.

Whilst purists opting for the manual might scoff at anyone choosing an automatic, the fact is that the DSG is more enjoyable, just as quick and the one we would pick. Let’s face it, how often will Slavia owners seek out an open road to max their cars? Five days of the week will be spent tackling traffic and for that there’s nothing to beat the 1.5 TSI DSG. 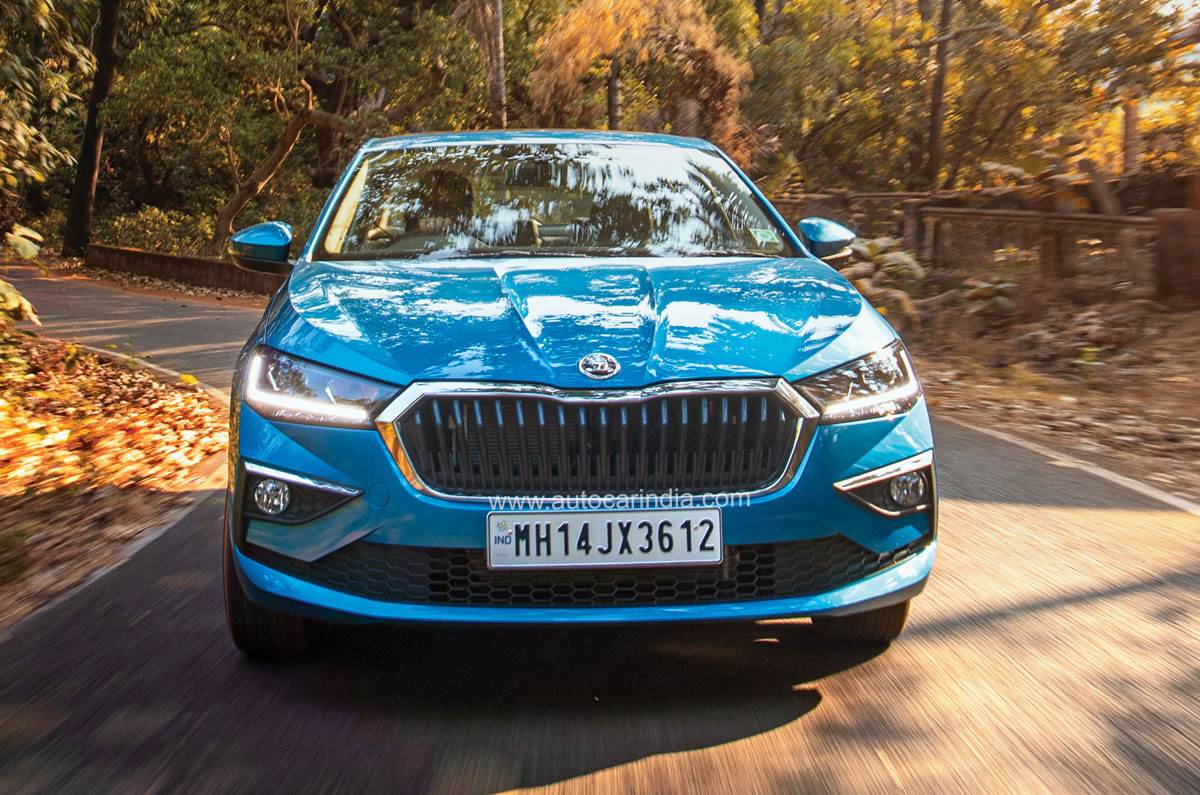 There’s a noticeable difference between the handling of the 1.0 TSI and 1.5 TSI. While the 1.0 TSI is much lighter and nimbler, and hence responds a bit quicker to steering inputs, the 1.5 TSI is distinctly nose heavy in comparison and on an undulating surface, the front end bobs a bit. Like the 1.0 TSI, it’s very stable at high speeds and ride quality is simply outstanding. No surface seems to faze the Slavia, which, riding 179mm off the ground, doesn’t feel it has to stop down for anything except the law. The steering is on the lighter side, but in no way lacking in feel or accuracy and overall the Slavia 1.5 TSI has fantastic body control.

The 1.5 TSI versions have been launched in only the Style variant and priced at Rs 16.19 lakh for the manual and Rs 17.79 lakh for the DSG Auto, they are a whopping Rs 2.2 and Rs 2.4 lakh over the 1.0 TSi counterparts. That’s a lot to pay for what is essentially just a bigger engine since every other bit of the car is identical to the 1.0 variant.

It’s a price only driving enthusiasts can justify because what they get, is the most fun-to-drive sedan for the money in addition to the fantastic space, features, a large boot and best-in-class driving dynamics the Slavia offers.

Yes, the Slavia 1.5 TSI is expensive, but no other midsize sedan is as thrilling to drive and for that, it’s tough to say if it’s good value or not. The 1.5 TSI is to be bought with the heart. And a fat wallet.